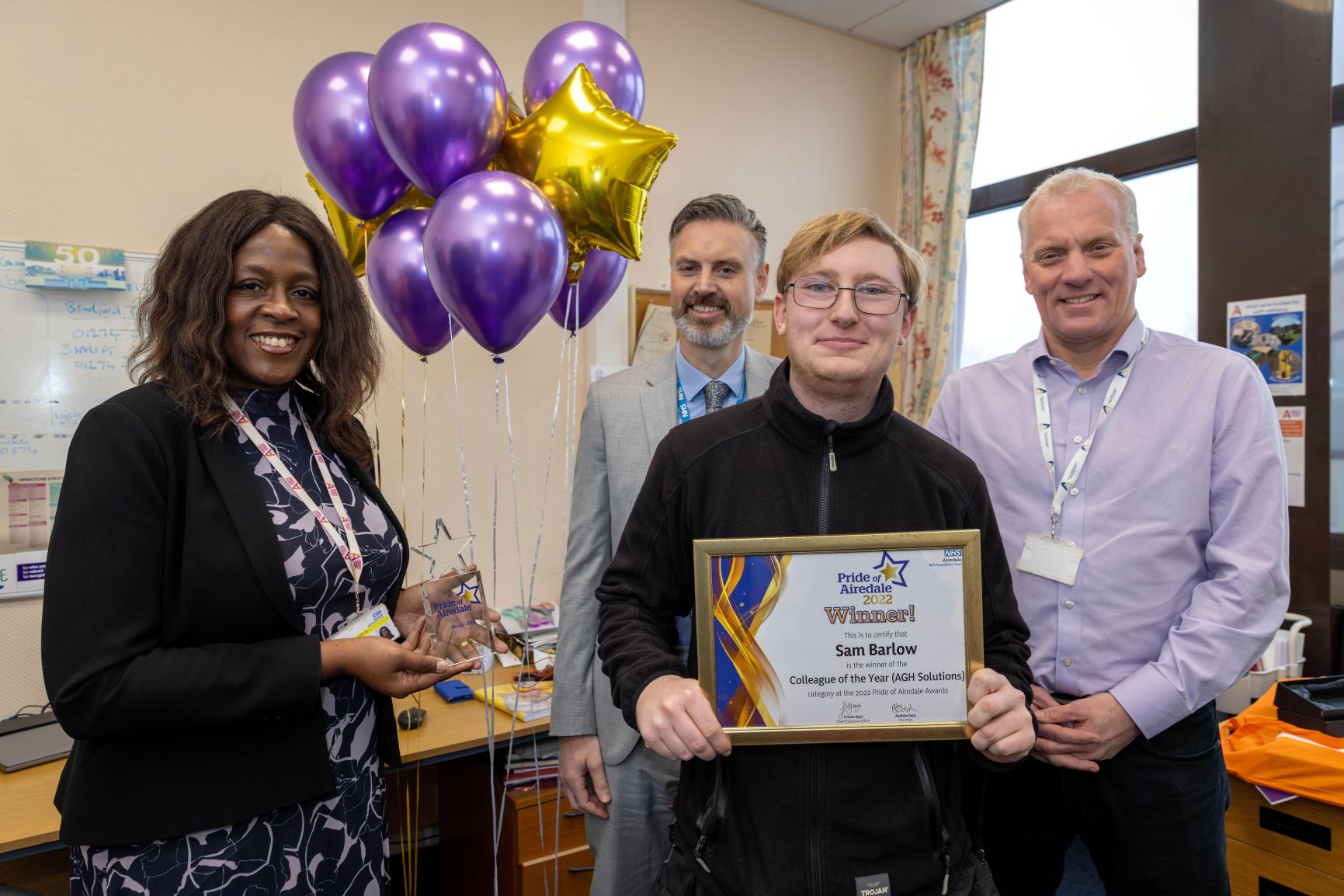 Pride of Airedale awards return for 2022

14 staff members and volunteers from across Airedale NHS Foundation Trust and AGH Solutions scooped a Pride of Airedale award in recognition of the hard work and dedication they have shown over the past year.

As with the previous two years, the winners were surprised in their place of work and presented with their awards by members of the judging panels and executive team.

“It has been a privilege to take part in the award presentations, surprise the winners and hear the amazing things that colleagues have had to say about each other.

“Over 295 nominations were submitted this year and, although the judging panels had the difficult task of narrowing it down to just 14 winners, every nominee should be immensely proud that their hard work over the last 12 months has been recognised by their colleagues.

“This is my first year taking part in the Annual Pride of Airedale awards and seeing the high calibre of nominations makes me incredibly proud and humbled to be a part of this organisation.”

This year’s categories and winners are:

Winner of the Leader of the Year award, Sharon Golson from Bradley says:

“What a surprise! I feel like I have won the Oscar of Nursing.

“I am honoured and delighted to receive the Leader of the Year award. Although I’m Ward Manager, my success could not have been achieved without the support and hard work of ‘Team Ward 20’.

Physiotherapist Misbah Ahmed, 26 from Bradford, received the Unsung Hero award for her involvement in several projects and initiatives to promote Allied Health Professional (AHP) careers to young people who may not have considered AHP roles.

Misbah’s nomination stood out from 39 others as it highlighted her dedication to encouraging applicants and growing diversity within the AHP teams.

“I’m very overwhelmed by this and I’m so grateful to even to be nominated.

“I couldn’t have done this without the support from my team and senior management and I just want to thank everyone who was involved in the project for making it a success.”

Team of the Year received 80 nominations across three categories.

Three nominations were submitted for the Emergency Department who were chosen by the judging panel to be the recipient of the Team of the Year (clinical).

“We really appreciate that our hard work has been noticed by our colleagues and winning the award has been a great end to the year.”

Over 150 Catering colleagues were recognised for providing a positive patient, colleague and visitor experience as the Catering Department took home the award for Team of the Year (AGH Solutions).

“This is a great achievement for our Catering colleagues.

“Each day, the team serve over 900 meals to patients and over 200 meals to colleagues, not to mention the numerous cups of tea and coffee they serve day in day out. The team deliver this service 365 days a year and really do get the chance to make a positive difference to people’s wellbeing.

“Thanks to the team and our catering dietician, we’ve come a long way with hospital food over the last few years.

“We have strong ambitions for the future and are ready to maintain the title of Team of the Year.”

2022 was the year of Airedale apprentices as three of this year’s winners were on apprenticeship courses during the nomination period and another had recently completed their training earlier in the year.

Nathaniel Davies, an apprentice Healthcare Support Worker in the Emergency Department, won the Quality Award for Outstanding Patient Experience. His nomination described how he sensitively and compassionately cared for a patient who was in his last days of life, making sure he wasn’t lonely after establishing he didn’t have any family.

“I’m so overwhelmed to have won this award. I just love caring for people. I like to treat them how I would want my family to be treated if they were in the same position.

“The team in the emergency department are fabulous to work with and, without their support, I wouldn’t have taken on this apprenticeship.”

Nathaniel worked as a cleaner at the Trust for two years during the pandemic before being encouraged to start his apprenticeship.

Deputy Operations Director Ninna Grey-Treco was one of Nathaniel’s nominators and says:

“To recognise a dying patient, provide comfort and support and engage in truly person-centred practice whilst working in an extremely busy and hectic emergency department is an exceptional standard of care. To do this in the first three months of his apprenticeship is outstanding.

“He is a true asset for the future of nursing.”

Sam Barlow, 20, from Kildwick, completed his apprenticeship earlier in the year and is now the Gardening Team Supervisor.

He was nominated by his colleagues for his passion for gardening, thoughtfulness and creativity.

“It’s a real honour and a privilege to be given the award. I come to work with my happy face on and always try to look at the positive side. It’s great that people have seen my positivity.”

The Collaborative Care teams were chosen as the winner of the Airedale Partnership Award. This award is for those who deserve to be recognised for their commitment to ‘Acting as One’ and working collaboratively to improve Airedale’s services within the wider health and care system.

“The team are so proud to receive this award.

“Delivering both the Urgent Community Response Pathway and Virtual Ward Pathway has been an incredible challenge but they have adapted brilliantly to this new way of working and continue to deliver personalised care to the highest standard.”

Police officer Grace Detoeuf from Crosshills received the award for Volunteer of the Year for her work with the Sunbeam Support Group. The group provides a welcoming space for anyone who has experienced the loss of a baby or young child.

“I am completely overwhelmed and honoured to receive a Pride of Airedale award.

“I don’t volunteer for the Sunbeam Support group for the recognition. It’s just great to be a part of a group like this as the work we do is really important.”

Winners received a certificate and personalised glass trophy and pen, as well as prizes which included Love2Shop vouchers, Pride of Airedale branded chocolates from Whitakers Chocolates in Skipton, or food hampers from Robertshaw’s Farm Shop in Thornton.