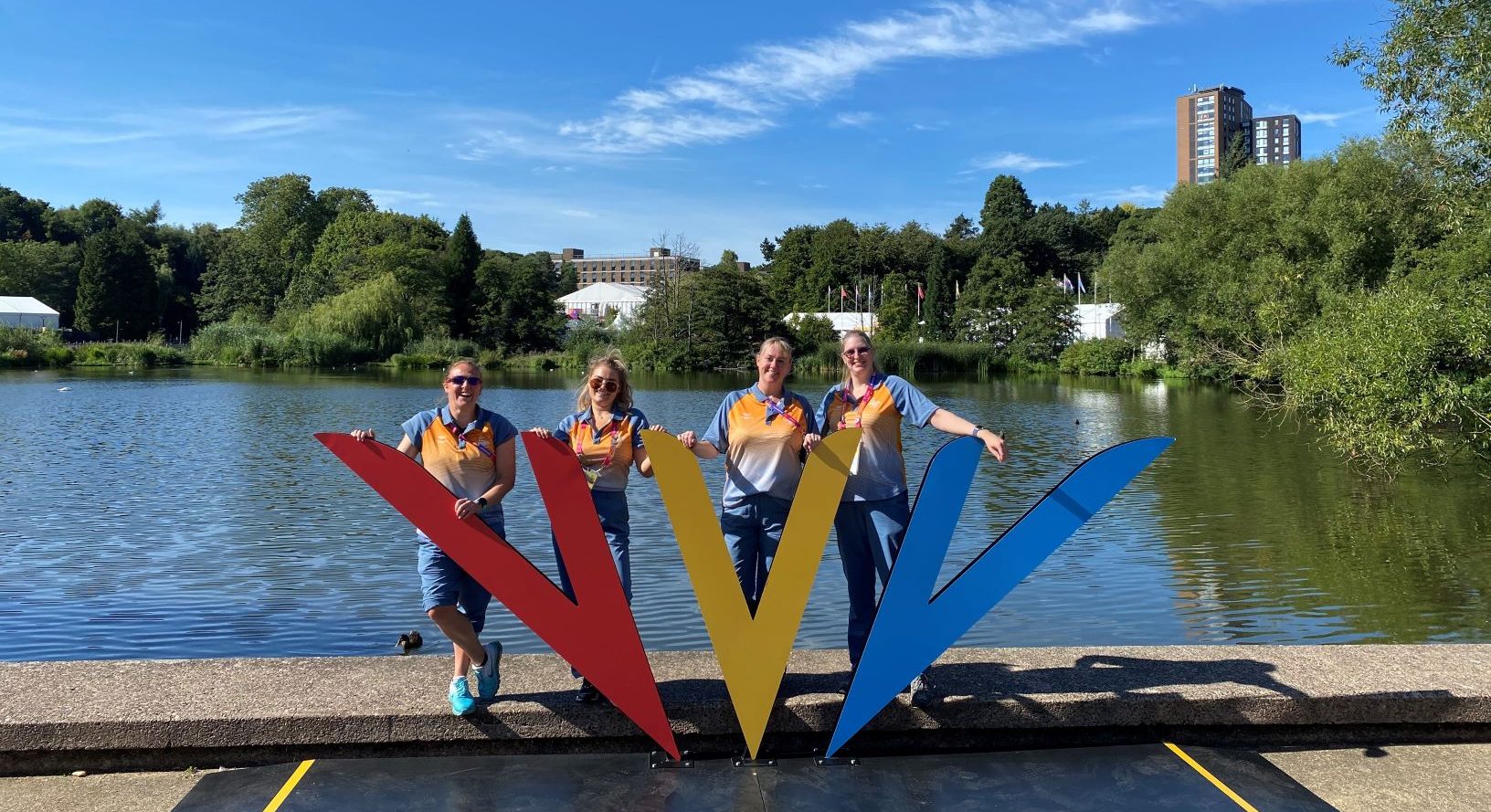 Our very own MSK Physiotherapist and First Contact Practitioner, Sarah Rennison, shares her experience of volunteering at the 2022 Commonwealth Games in Birmingham.

How did you get involved with the Games?

My Commonwealth Games journey began in Summer 2021 after seeing an advert on social media asking for volunteers to support the games.

I had never done anything like this before and just thought, why not? When else in my working life will I get to see another large-scale sporting event such as this?

I submitted the application and didn’t think much else of it.

I was then invited along with 44,000 others to an informal interview at the Library of Birmingham in November 2021, where we were asked what had prompted us to apply.

For me, my motivation was the ongoing legacy of the London 2012 Olympic Games. Even a decade later, people still talk so fondly of them and, whilst this was going to be the Commonwealth Games, I wanted to be a part of something historic that would also be looked back on fondly in years to come.

What was it like when you got to Birmingham?

Although the Games began on 27 July, athletes started to arrive before then, so I headed down on the M6 on 21 July, readying myself for my first shift the next day.

My first shift was incredibly busy. My Polyclinic base was in the largest of the three Athlete Villages and I spent the day unboxing all the medical supplies and making sure the clinics were ready for the athletes to use.

The clinic housed a full multidisciplinary team (MDT) of GPs, sports doctors, practice nurses, pharmacists, radiologists, optometrists, dentists (and their nurses and hygienists), physios, osteopaths, chiropractors, podiatrists and sports massage therapists as well as clinic managers and receptionists. For the first time in Commonwealth Games history, there was also a mental health team of clinical psychologists and mental health nurses to look after everyone including the volunteers.

On my second day, due to having a pitch-side trauma certification from my Rugby Union work, I was sent to the athletics training track. As it was their first full day there, most of the athletes were just easing themselves into training after their travels so it was fairly quiet but we met athletes from Papua New Guinea, Fiji, Kenya and the Maldives.

For my third shift, I was stationed at the ‘Throws’ venue where the Hammer and Discus athletes were training. Thankfully, no injuries occurred so I got to enjoy watching the Scottish and English athletes throw the hammer.

On one of the days, I was asked to go to the NEC to support the spectator medical team and offer first aid treatment to members of the 50,000-strong crowd. This was the first time that I had been to any of the competition venues and it felt great to be in the middle of it all. I even managed to peek into the badminton and boxing bouts that were taking place that evening.

My final shift was on 8 August which was very different to the others. I was on the late shift, but we got to close the clinic briefly to cheer on the athletes as they headed off to the closing ceremony. I managed to get a picture with 3×3 basketball player, Jamell Anderson and his gold medal. I hadn’t seen the medals yet and it was exciting to finally get to see on in the flesh (even if it was brief).

What did you do in your free time around the city?

On my first free day between shifts, I headed to my spiritual home – Cadbury World!

I did the factory tour and probably spent more than I should have done in the gift shop at the end.

The following day I went into Birmingham city centre to explore the Bullring shopping centre. It was weirdly exciting as I hadn’t been to a large shopping centre since before the pandemic.

I had a gap in shifts around the Opening Ceremony, so I headed back to the day job at Airedale to see patients. It was weird to leave just as everything was kicking off to the rest of the world, but I was back in the action on 3 August.

When I had some free time on my return to Brum, I headed back into the centre to get a glimpse the mechanical bull that featured in the Opening Ceremony and caught it on the hour they were bringing it to life.

Was volunteering at the Games what you had expected?

Having never done anything like it before, I don’t know what I originally expected from the experience. I knew from my rota that I would be based at the Polyclinic but, beyond that, I didn’t have a clue.

Seeing the Games behind the scenes has been fascinating. It’s been great to see the logistics of the athletes arriving, training, medical care etc. The bigger countries such as England, Australia etc all have their own medical teams so often we didn’t see those athletes unless they needed imaging (which was dealt with by the doctors).

It has been a fabulous experience. It was great to meet and work with professionals from all over the country from different backgrounds.

The spectators were lovely too, on one shift in the Fan Park we had lots of lovely comments from people about how fabulous the volunteers had been.  One chap even bought us all an ice cream to say thank you which was much appreciated on a very warm day.

I have made some great friends that I hope to keep in touch with and although I had to pay for my travel, accommodation and take annual leave from work, I don’t regret a minute of it and would do it all over again.